Substantial changes were made to RCAT in early 2020 to improve accuracy, flexibility, stability, and usability of the RCAT toolbox. The fundamental riparian vegetation departure and riparian condition assessment outputs are comparable between RCAT versions, though version 2 outputs host significant methodology changes and are more accurate than version 1 outputs. Major changes in RCAT Version 2.0 are listed below. Detailed workflows can be found in the individual tool documentation.

To start the RCAT Version 2.0 tutorial, click the links below:

In RCAT Version 1.0, riparian vegetation, vegetation groups, and land use fields were hard-coded into the RVD and RCA tools. This prevented flexibility in these codings between watersheds and also limited RCAT to accepting LANDFIRE vegetation data. Hard-coding these fields also opened RCAT up to the possibility of being antiquated or missing updated fields and vegetation types included in newer LANDFIRE releases.

In RCAT Version 2.0, none of the required vegetation fields are hard-coded into the main toolbox. Instead, all required vegetation fields must be user-specified manually prior to running RCAT. For users using LANDFIRE data, the new Add LANDFIRE Fields tool in the Supporting Tools category of the toolbox will add these fields. However, we highly encourage that you double check the fields added by this tool to make sure the classifications represent the realities in your study area and that no landcover types were missed.

This change will allow more accurate classifications across study areas and project objectives, as well as enable RCAT to accept any vegetation dataset that has the required attribute fields added and populated as described in the preprocessing steps.

This change should greatly improve accuracy of riparian condition outputs, especially in areas where dredging activity is not represented in the vegetation and/or topographic data.

In RCAT Version 2.0, confinement metrics are calculate by comparing valley bottom width to bankfull channel width. For this worflow to be effective, bankfull channel and confinement tools were added to the RCAT toolbox. Valley bottom and bankfull channel widths are now calculated by dividing these polygons to match up with the segmented network, then taking the polygon area divided by the stream segment length (which is equivalent to the polygon length at the axis along the stream). The ratio between these two widths is then taken. A user-specified threshold still must be set in RCA to separate confined and unconfined metrics, but now this threshold will be consistent across watersheds since it pertains to a bankfull channel:valley bottom ratio rather than a raw width.

These changes improve the accuracy of confinement and make confinement values and thresholds consistent across study areas.

In RCAT Version 2.0, the riparian conversion fields include the following changes:

These changes increase the accuracy of riparian conversion outputs and acknowledge points of ambiguity, including when data is scarce for a reach.

Fixed bugs in VBET and improved accuracy to minimize the need for manual editing. Added batch scripts for VBET in the supporting tools folder.

RCAT Version 2.0 generates layer files for all inputs, intermediates and outputs and incorporates a Layer Package Generator tool to gather layers into a layer package with consistent symbology and organization.

In RCAT Version 1.0, separate project folder structures were created for RCA and RVD, and the calculations for riparian vegetation departure were run in both RCA and RVD.

In RCAT Version 2.0, all RCAT inputs and outputs are stored in the same project folder, and RCA uses the outputs from RVD instead of re-calculating these fields. RCA also uses the thiessen polygon intermediates created by RVD instead of recreating these thiessen polygons. The RCAT toolbox interface has been improved to reflect these workflow changes (see below). The RCAT project folder structure has also been improved to better organize inputs, intermediates, and outputs (see below for example).

These changes will greatly increase the efficiency and project tracking of RCAT projects. 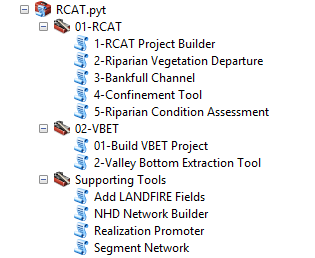 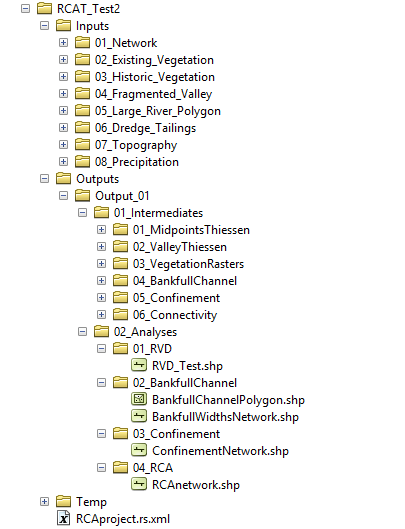 Many bugs were fixed in this version, which has greatly increased the stability and reliability of the RCAT toolbox.